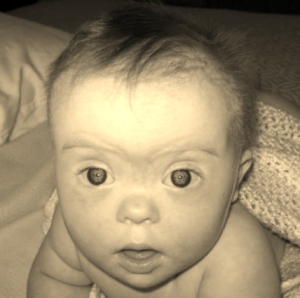 One of the first things I learned from the Down syndrome community was how not to offend people by using the ‘wrong’ words. This is where I was told that the word normal is rude and offensive. The proper word to use when describing other children that did not have DS, was ‘typical’. The linguist in me immediately began analyzing what the words actually meant and which word was in fact more appropriate within the context I would refer to. The other part of me rolled my eyes.

I believe in educating people and being tolerant of those that differ from you in whatever way. I believe in being respectful. But I also realize that the majority of ‘typical’ people are not trying to be hurtful, degrading or intolerant when they misspeak.

I personally am not offended when people use the word, normal, to refer to children that do not have DS. When you ask someone what normal is most often they will laugh and say well nobody and nothing is really NORMAL. I still refer to other children as normal, knowing full well that there is no normal when it comes to humans or animals.

I have noticed how difficult and awkward it is for people to ask questions and speak about Lily having DS. Most people seem so afraid that in their ignorance of DS, they will offend me and thus end up in an uncomfortable or embarrassing encounter so they look but don’t say anything or they speak around the topic. I believe there is merit in learning to lighten up a little- it is more important to me to normalize discussing DS then it is for people to use the correct terminology. I appreciate so much when people come up to me and ask does your daughter have DS? To me that gets rid of the stigma that Down syndrome is hush hush and something bad that we can’t ask about. 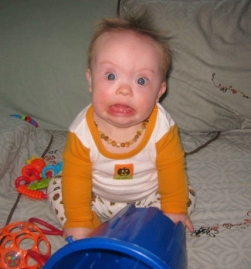 In my almost 2 years of being Lily’s mom, I have learned that the more friendly and open I am about Lily, the more relaxed and forthcoming others are. When Lily and I are out and about, we are approached, often several times, by people wanting to extend their hellos to us and remark on what a doll Lily is. Sometimes they venture a comment regarding Down syndrome, sometimes not. I used to wonder if Lily received so much attention from strangers because they knew she had Down syndrome and were giving her ‘special’ treatment, Maybe they are and maybe they aren’t- Oz seems to generate quite a bit of attention for himself too- perhaps its because I have very happy, outgoing, and friendly children- who wouldn’t want to stop and enjoy a little of that? 🙂 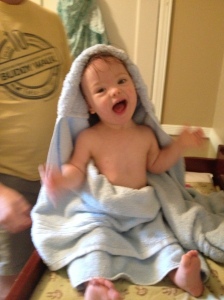 Now I am not saying that I do not sometimes feel offended or even hurt, I have days that I am much more sensitive about things than others. However, I return to the bigger picture. A world where Lily can evolve as herself, in the wide open, around all the ‘normal’ people without any hushed disclaimers. 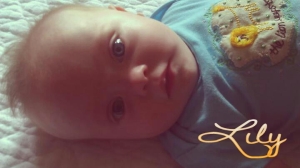 One thought on “DSAM Day 29: Disclaimer- Lily has Down syndrome”